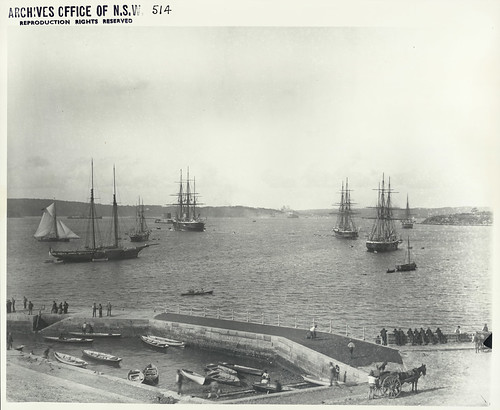 Prompted by comments from Gael Newton and Megan Martin, we are looking again at Joseph Philip Bischoff, the first recorded photographer for the Public Works Department. Megan and Gale have let us know that he married Isabella Mary Lincoln on 24 August 1868 at Sydney when he was a stable keeper, was an active photographer from the mid-1870s, sold his business premises and equipment in January 1901, and died on 18 May 1903. He was born at Athaldensleben, Germany [Althaldensleben] in approximately 1832 and was the son of Friedrich/Frederick Bischoff, farmer or tailor, and his wife Elizabeth nee Haber. Joseph Bischoff photographed the Transit of Venus in December 1874 and the Grose Valley in September-October 1875. See Gael’s book Shades of Light: Photography and Australia 1839-1988 (Australian National Gallery, 1988) for more information on the latter. According to his funeral notice in the Sydney Morning Herald 20 May 1903, p12, Joseph was buried at Concord Cemetery, which was later transformed into Henley Park under the Concord Cemetery Act, 1937 (Act No.15, 1937). Any bodies and headstones were supposedly moved to Rookwood Cemetery.

The ‘Alfred’ arrived in Sydney on 26 November 1862, having sailed from Hamburg on 29 August, a voyage of 88 days. There is no listing on the ‘Alfred’ for a Joseph Bischoff but there is for a Hermann Bischoff as a passenger. As the passengers were not sponsored as immigrants by the NSW government, the only information about them and the crew is their name. The arrival information for the’ Alfred’ is available on the Mariners and Ships in Australian Waters website. The ship’s departure record from Hamburg confirms that his name as Hermann Bischoff, aged 30, gives his native place as Althaldensleben, Prussia, and his gewerbe or trade as ‘gaertner’ or gardener (Ancestry, Hamburg passenger lists, 1850-1934, Direkt Band 016 (1862) page 177, image 237).

When Joseph Bischoff died on 18 May 1903, he did not leave a will. His probate packet is therefore concerned with the administration of his estate by his wife, Isabella, who was the sole person entitled to the estate. The packet contains no clues as to his background. He also has a Deceased Estate file, which relates to the assessment of the estate by the NSW Stamp Duties Office for the payment of death duties. Both the Probate Packet and the Deceased Estate file note that he had a house on Lots 57 and 58 Brunswick Parade, Concord, worth 200 pounds, furniture worth 20 pounds, a watch worth 3 guineas, wearing apparel worth 5 pounds, and money in the bank of 59 pounds, 1 shilling and 11 pence plus 17 shillings and 10 pence interest. The valuation does not mention cameras, photographs or negatives. (NRS 13660 Probate packets [Probate Jurisdiction Supreme Court of New South Wales]; Item Series 4, No 28817 and NRS 13340 Deceased estate files, 1880-1959 [Stamp Duties Office]; Item Joseph Bischoff Duty paid 8 August 1903)

Bischoff appears in Sands Postal Directories for 1868 and 1869 as a livery stable keeper, from 1873 to 1877 as a photographer/ landscape photographer, and again from 1884 to 1905. This prompts the question of what he did between 1877 and 1883. He is referred to in the Australian Town and Country Journal on 13 May 1876, p16, as having taken images of prize winning Lincoln rams belonging to Mr Fisher of Victoria and again on 9 September 1876, p28, as competing in the photographic section of the Queensland Exhibition with images of NSW’s mountain scenery. Was he working for another photographic company, travelling in the country or other states, or did he just not bother to list in Sands?

The elusive search for his career with Public Works

Then there is the puzzle of his employment with the Department of Public Works. The Blue Books, an annual list of the NSW civil service, state that he was employed in the Department from 1 May 1883. However he appears for the first time in the 1890 Blue Book, rather than in the 1884 Blue Book as one would expect. His name only appears from 1890 to 1894 inclusive.

However another list published in 1893 confirms that he was employed from 1883. On 7 June 1893 the New South Wales Legislative Assembly published a ‘Return respecting Foreigners Employed in the Department of Public Works‘ in the Votes and proceedings of the Legislative Assembly during the session 1892-3, Vol.3, pp133-5. This list provides the foreigner’s name, occupation, salary and length of service and whether naturalised. J Bischoff is described as a photographer, paid 250 pounds per year, has been employed for 10 years, and was naturalised on 26 November 1875.

Bischoff was a temporary employee, rather than a permanent one, despite being employed for approximately twelve years. The Blue Books state that he was appointed by the Secretary of Public Works, thus indicating he was temporary. Permanent employees were appointed by the Governor and Executive Council. Under section 31 of the Civil Service Act, 1884 (48 Vic No.24, 1884), employees who had not passed the prescribed civil service exams could be appointed as temporary for a maximum of two years. However this time limit does not seem to have been obeyed. Joseph Barling, the Under Secretary for Public Works, remarked when he appeared before the Royal Commission to inquire into the Civil Service on 26 February 1895 that ‘The Act gives, I think, only a tenure of two years, but that has been a dead letter from beginning to end, as you are all aware…’ Also in his evidence before the Royal Commission, Barling reveals that he was opposed to employing people over 60 years of age, even though the retiring age was 65. If Bischoff was born in 1832 he would have reached retiring age in 1897. (Report of the Royal Commission to inquire into the Civil Service, pp235-6, in Votes and Proceedings of the Legislative Assembly during the session 1894-95, Vol 3, pp367-8)

Bischoff was not with the Department in 1897 when the next published list of all NSW civil servants appears. This was after the civil service, and the Public Works Department in particular, had undergone major upheavals. John Degotardi Junior who is listed as the next Public Works photographer was appointed on 6 January 1897 and this is confirmed by his staff record card. (Public Service Lists 1897, p72; NRS 12535 Staff record cards, c1890-1953 [Department of (Secretary of) Public Works]; [7/11491])

Bischoff’s name does not appear on two lists of Public Works employees produced in 1895-96 as a result of the reorganisation of the public service. During 1894 and 1895 the Public Works Department underwent a complete restructure. At the same time the Royal Commission of inquiry into the Civil Service, held from 20 November 1894 to 8 April 1895, resulted in the creation of the Public Service Board to control the appointment and promotion of civil servants. On 19 November 1895 a list of present and proposed staff and retrenched officers of Public Works was published in the Votes and Proceedings, with the information that 119 officers had been dispensed with during 1894 and 1895. Bischoff’s name is not on this list, either as retained or retrenched. (Votes and proceedings of the Legislative Assembly for the session 1895, Vol 1 pp541-550). During 1896-97 the Public Service Board evaluated and classified all civil service positions and employees and published the results in the NSW Government Gazette. Again Bischoff’s name is not listed as part of Public Works, not even with the temporary employees made permanent. 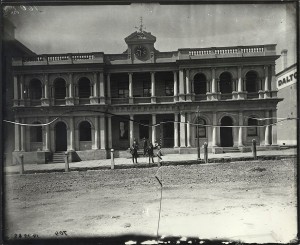 From my experience with the Public Works Department glass negatives, Bischoff identified his negatives by scratching a number into the emulsion. Bischoff’s numbers are recognisable by his use of a European or Germanic number one – which looks like a number seven. Thank you to my colleague Anna Gray who pointed this out. Also Bischoff writes his number five with an extra stroke and a space at the top that makes it look like a three followed by a quotation mark. An example of a Bischoff number can be seen on the image of the Orange Post Office and Land Survey Office, Orange (NSW), 1885 which shows the number 160 in reverse in the left top corner. It also shows evidence of two other numbering systems: P33 and 704. 160 is the Bischoff number. This renumbering and reorganisation is the reason why what may be Bischoff’s original listing for the Public Work’s negatives cannot now be used to locate them (NRS 4489 List of glass negatives [Government Printing Office]; Item C2 list [4/8599A]).

Examples of his numbers can also be found on negatives at the Powerhouse Museum and at State Library of New South Wales. The Powerhouse has a negative entitled Transit of Venus image 1874 (P3548-796) on which the number 175 may be seen on the top left corner. The State Library of New South Wales has an image of Fort Macquarie, Sydney, identified as being by Bischoff. The negative for this image was digitised as part of the NSW Government Printer Collection Disc 2 (Series C, Box 74), although it is not identified as being by Bischoff. The Fort Macquarie negative does not clearly show a Bischoff number, but there are others in Series C, Box 74 that do – using numbers from 149 to 155. Does this mean they date from before December 1874? Some of these images are described as Newcastle but that is doubtful, except for the image of Fort Scratchley which is scanned in reverse. Note the box also contains modern images such as kangaroos, swimming and cars under trees.
Some of Bischoff’s Public Work’s images were published in the annual report of the Department (Secretary) of Public Works from 1891 to 1895-6, although the prints do not show the numbering system. The annual reports are available at the OpenGov NSW website. Also a search of Trove pictures, photos, objects shows that the State Library of Victoria has posted images of Grose Valley and the Historic Houses Trust the images of Palmerston at Waverley referred to by Megan. 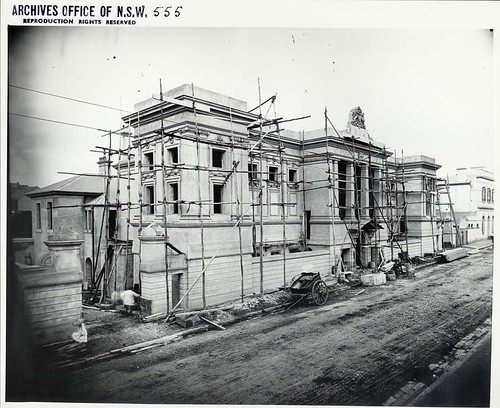 Thanks to the internet, the wonders of digitisation, to Ancestry and to the National Library’s Trove we can learn more about Joseph Bischoff and his work than we were able to previously. Especially when people like Gael and Megan are willing to share their information and organisations like the State Library of New South Wales, the State Library of Victoria, the Powerhouse Museum and the Historic Houses Trust are willing to share their images.

Jenny Sloggett is an Archivist working in the Archives Control and Management section of State Records NSW.