Dr. Caroline Ford at the launch

In 2009 Dr Caroline Ford was the inaugural winner of the NSW Archival Research Fellowship. The scholarship enabled her to expand her research on Sydney’s relationship with its ocean foreshores, originally undertaken for her 2007 PhD at the University of Sydney. On 23 October 2014 the Hon Rob Stokes, MP, Minister for the Environment and Minister for Heritage, launched Caroline’s book Sydney Beaches: a History.

Caroline described her book as an ‘environmental, cultural and political history of our much-loved ocean coast’. Although the thesis only went up to 1920, the book includes up to the present day. Working with the archives

Relying heavily on the State Records collection, especially NRS 8258 Letter received [Miscellaneous Branch, Department of Lands], she ‘read thousands of pages of original government records that explained why particular governments made critical decisions that changed the shape of our beaches forever…’. One of these government decisions that comes as a surprise to modern readers was to buy the beaches back from the land owners in the late nineteenth and early twentieth centuries including iconic beaches like Tamarama and Bronte, ensuring that Sydney beaches are free to the public. Despite the difficulties of locating files within NRS 8258, it contains some surprising material. For example in one file Caroline found a rejected proposal from the early 1930s to build a Luna Park on Bondi Beach which included an evaluation and report on St Kilda’s Luna Park. She has written about this in another forthcoming publication. Other files from the same period detailed community and government opposition to enclosed shark nets planned for Bondi and Manly ocean beaches, and the battles campers faced along the coast in pitching their tents close to their favourite strips of sand. 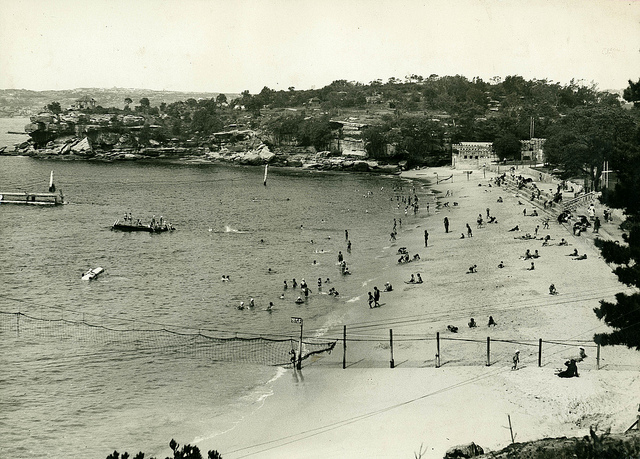 Behind every good researcher ….(there is a good retriever)