One way and another Governors have been a popular topic of conversation in NSW lately. Last week it was announced that General David Hurley will be the next Governor of NSW, while over the weekend retiring Governor Marie Bashir was appointed a Dame of the Order of Australia in the Queen’s Birthday Honours List.

Here at State Records NSW we’ve been focussed on a Governor from a different era, Charles 3rd Lord Carrington, former Governor of New South Wales from 1885 to 1890.  On 23 May 2014, Minister for Finance and Services, Dominic Perrottet, joined Governor of New South Wales, Her Excellency The Honourable Marie Bashir, at Government House to receive a gift of historic volumes from the Carington family. 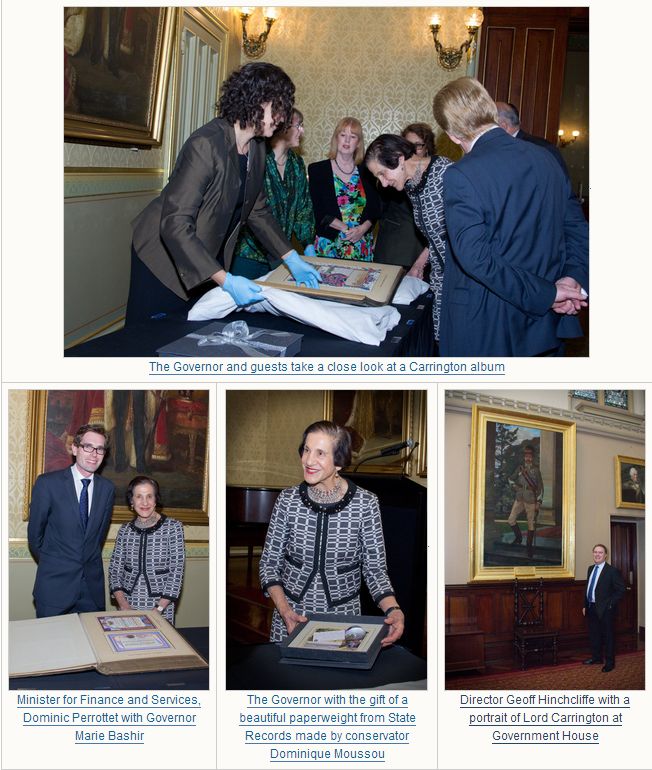 You may also have seen the volumes featured on the NSW version of the 730 Report on the ABC last Friday night.

The 22 leather bound volumes contain hand painted dedications, photos and memorabilia from regional towns visited by the Governor in the 1880’s. It provides a snapshot of pre-federation NSW at a time when the colony was on the cusp of great change. A sample of the images have been uploaded into an online gallery. *These facts are sourced from the following publications: Clune, David and Ken Turner (eds.), The Governors of New South Wales 1788-2010, The Federation Press, 2009 Rollo Gillespie, Viceregal Quarters: An Account of the Various Residences of the Governors of New South Wales from 1788 until the Present Day, Australia, Angus and Robinson Publishers, 1975.

News of the Carrington volumes hits the Northern Hemisphere!