News of the presentation of the Carrington volumes to New South Wales has travelled to the Northern Hemisphere and the home county of the Carington family in Buckinghamshire.

A fascinating Victorian archive of life in New South Wales (NSW), donated by the Carington Family of Buckinghamshire, has made its debut in Australia.

The current state Governor, Marie Bashir, was joined by other representatives of the NSW state government to unveil the gift.

Known as the Carrington Volumes, the 22 exquisite leather bound albums were presented to the third Lord Carrington upon his retirement from a five-year term as NSW Governor in 1890.

The captivating Victorian collection consists of 13 albums of hand-illuminated manuscripts, detailing expressions of gratitude and fond farewells from towns, cities and establishments visited by Lord and Lady Carrington.

The story was also featured in the South Bucks Star 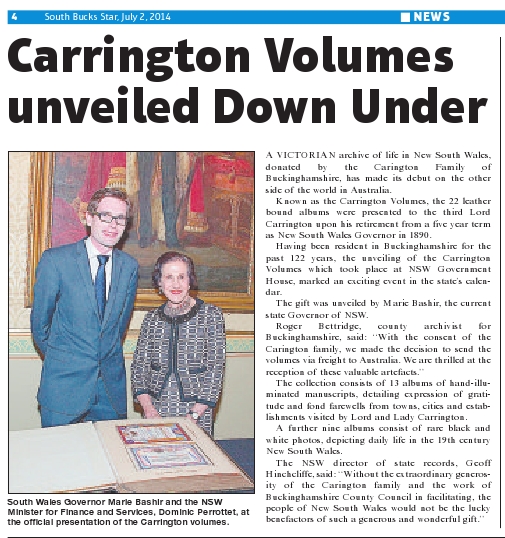 NAIDOC Week celebrations are held around the country each July to celebrate the history, culture and achievements of Aboriginal and Torres Strait Islander peoples.

The week is celebrated not just in Indigenous communities but also in government agencies, schools, local councils and community organisations.

To see what celebrations are taking place near you, check out the 2014 local NAIDOC events calendar or find some ideas on how to celebrate NAIDOC Week.

Here are a few archive/history themed links for NAIDOC week.

More Than Service: Black Diggers and The Great War

In commemoration of the centenary of the First World War the History Council, NSW and Cosmopolitan Civil Societies Research Centre, UTS, invite you to a symposium about the contribution of ‘Black Diggers’ to the war effort and how their service changed social and economic relations on the home front.

Records show that more than 800 Aboriginal men enlisted, eager to fight on behalf of their country: they served in this conflict on equal terms, successfully breaking down cultural barriers by forming friendships with those they fought side by side. The participation of Aboriginal Servicemen in the First World War held immediate implications for families and communities on the home front.

As we approach the centenary of the First World War the Indigenous Champion Project is proudly honoring the service and sacrifice of Aboriginal and Torres Strait Islander Servicemen and women by sharing with you their wartime stories.

This site brings together all our resources that can help you identify, access and use State archives that relate to Indigenous people.

Here are some of the online sites we’ve been exploring this month.

What are the most commonly accessed digitised items from heritage organisations? Even asking the question leads to further understanding about the current digitisation landscape……….

……These results, from very different institutions, invite discussions on shallow versus deep engagement with digital collections. Some examples of commonly accessed material are what we would think of as part of the Canon of Digitised Content: Shakespeare, Newton, Medieval Manuscripts. Some examples of commonly accessed material here can be taken as little more than clickbait – LOL! History! – or free reference material – its a free Malaysian Dictionary! Bonus! – but is getting people through the virtual door to digitised collections in this way, and through these items, such a bad thing? Come for the Dog with the pipe in its mouth! stay for the genealogy, then the discussions on palaeographic method!

Check out the answers and resulting discussion! 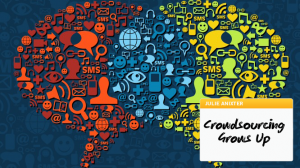 It’s been almost ten years since James Surowiecki published The Wisdom of Crowds, which launched the notion that there was wisdom, and indeed robust solutions to be harvested from “crowds” that far exceeded comparable individual efforts.

According to Surowiecki, these key criteria separate wise crowds from irrational ones:

In parallel, aggregation platforms – often called Idea Management software were coming into being and in the decade since have matured, grown up, and become standard operating procedure for businesses solving problems of all kinds via crowdsourcing.

The Differences between Digital History and Digital Humanities

Scholars exploring digital media and technology have gained much from emphasizing what they have in common, particularly in a context when such explorations enjoyed at best tenuous recognition within disciplinary settings. However, in recent years the consistent presence of digital sessions at the annual conferences of the AHA and OAH, as well as of smaller organizations such as the Southern Historical Association, the Urban History Association and the International Congress on Medieval Studies, testify to a growing recognition that digital media and technology are part of scholarly practice. But that recognition does not mean that most historians have explored what can be done with digital tools, are equipped to do so, or are even convinced that those tools have anything to offer their own research and teaching.
Read more about the debate

Off with their Heads?: Matchbooks in Archives

I have a special spot in my heart for oddball items in the archives.  When a colleague approaches me with a question such as: “Nora, we have artists’ matchbooks! Should we remove them? Will they spontaneously ignite? Will someone try to light them and set fire to the archives accidentally, or worse, on purpose?!,” I delight in putting my creative problem-solving mind to work.  Also, I get to learn new words, such as phillumeny (the hobby of collecting matchbox labels, printed matchbox outers, matchboxes, matchbook covers, matchbooks, and other forms of match packaging).

What a great day we had on June 10, 2014, celebrating International Archives Day with the Twitter event #WW1archives!
Lots of archives, liraries, museums, other heritage organisations and tweeps participated, tweeting about the First World War in their archives or private collections.

Find out how it went

One way and another Governors have been a popular topic of conversation in NSW lately. Last week it was announced that General David Hurley will be the next Governor of NSW, while over the weekend retiring Governor Marie Bashir was appointed a Dame of the Order of Australia in the Queen’s Birthday Honours List.

Here at State Records NSW we’ve been focussed on a Governor from a different era, Charles 3rd Lord Carrington, former Governor of New South Wales from 1885 to 1890.  On 23 May 2014, Minister for Finance and Services, Dominic Perrottet, joined Governor of New South Wales, Her Excellency The Honourable Marie Bashir, at Government House to receive a gift of historic volumes from the Carington family. You may also have seen the volumes featured on the NSW version of the 730 Report on the ABC last Friday night.

The 22 leather bound volumes contain hand painted dedications, photos and memorabilia from regional towns visited by the Governor in the 1880’s. It provides a snapshot of pre-federation NSW at a time when the colony was on the cusp of great change. A sample of the images have been uploaded into an online gallery.

*These facts are sourced from the following publications: Clune, David and Ken Turner (eds.), The Governors of New South Wales 1788-2010, The Federation Press, 2009 Rollo Gillespie, Viceregal Quarters: An Account of the Various Residences of the Governors of New South Wales from 1788 until the Present Day, Australia, Angus and Robinson Publishers, 1975.

The Birdwood Flag in its original condition. [Courtesy of The University of Newcastle’s Anglican Diocese Archives in Cultural Collections A6137(iv)]

Gionni Di Gravio, Archivist of the University of Newcastle introduces Bronwyn Orrock, University scholar in Fine Arts who, from 2009-2011, undertook an important research project into the archives documenting the provenance of every object, relic and example of art and artisanship held in Christ Church Cathedral Newcastle.

Until 2014, one item eluded her, The Birdwood Flag, Australia’s first National Flag, and arguably the most important national cultural relic of the First World War, whose remains lay in a cardboard box in a safe. This is the story of the flag, its creators, and its rediscovery.

Uncover the mystery at the UoN Cultural Collections blog

Did you attend the Wagga Gold Cup on Friday? Or perhaps the Town Plate the day before? You may have dressed to impress the Fashions on the Field judges or have had a flutter or two. In all the excitement, did you ever think about the history around you? Did you wonder about others who for over a hundred years have stood in the same spot as you, screaming out “Go! Go!” during a race? The generations of women who, like you, had spent weeks working out what they were going to wear?

Horse racing at Wagga Wagga has a history going back over 160 years….

Check out the Wagga Wagga Race day fashions and characters at OntheRecord. 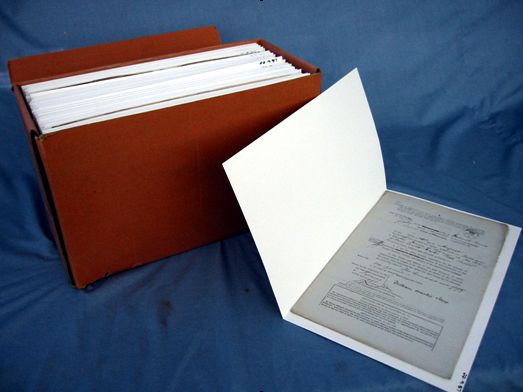 Records are rehoused after conservation

This course provides an opportunity for you to learn the theoretical and practical aspects of preserving and organizing archives and historical documents, whether they be family papers and manuscripts or the archives of public or private corporations, organizations, associations and societies. The course curriculum has relevance to custodians of archives and historical manuscripts of public as well as private organizations, and is of particular relevance to local studies librarians, museum and historical society curators whose custodial responsibilities also include local government archives and private or personal papers.

The knowledge and skills imparted in this course have application for the management of archives and manuscripts in a wide variety of institutions and organizations, such as schools and colleges, churches and religious congregations, professional associations and learned societies, industrial organizations, pastoral and agricultural societies, business corporations, and local government authorities.

“Gionni Di Gravio, Archivist of the University of Newcastle and Dr Ann Hardy discuss their recent trip to NSW State Records to photograph three bundles of hitherto lost documents of Newcastle in the late 1820s and early 1830s. The documents relate to an inventory of public buildings in the township that were being readied for what appears to have been the first privatisation prior to the Australian Agricultural Company take over of the Government Mines. They provide a digitised copy and transcription of one of these documents, and the importance of this information to the creation of the 3D early Newcastle model currently being constructed by artist Charles Martin for the University’s Coal River Working Party.” 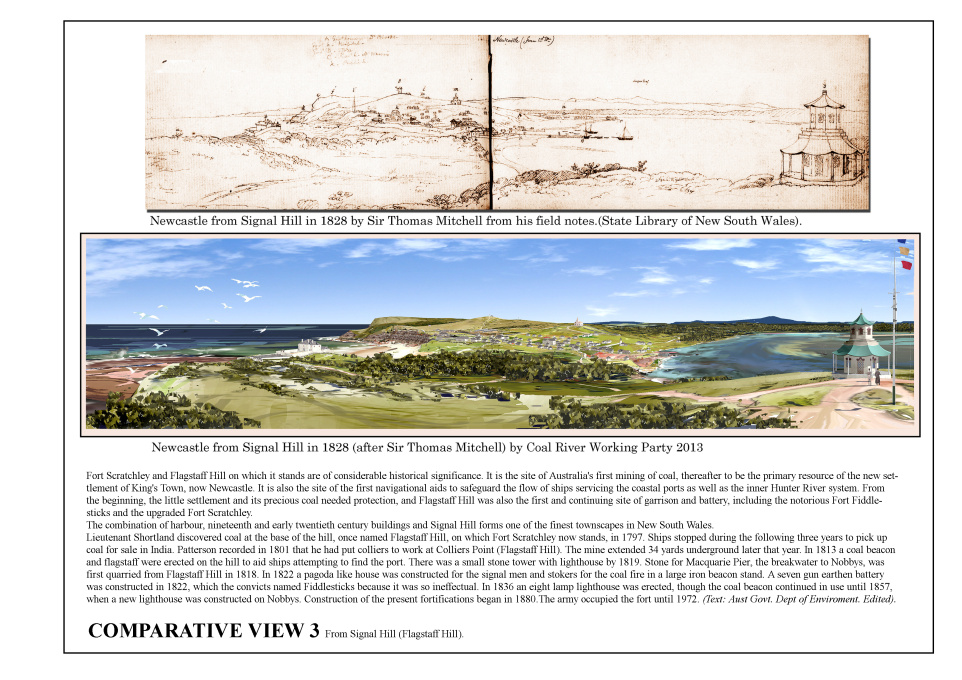 “February 13, 1954, has long been regarded by many as one of the most important days in Wagga Wagga’s history – the day Queen Elizabeth II and her husband, the Duke of Edinburgh, visited our city as part of their 1954 Royal Tour.

A special exhibition has been arranged between State Records NSW and the Parliament of NSW to commemorate 60 years since the 1954 Royal Tour and is on display at Parliament House in Sydney and the Western Sydney Records Centre until March 31.

At CSU Regional Archives, we too are revisiting the Royal Tour (from Wagga’s perspective) with an exhibition of material from both our own Collection and the Museum of the Riverina. The exhibition, which includes photographs, commemorative items, and a 15min film of the visit, will be on display in the Archives on CSU’s South Campus until 31 March. 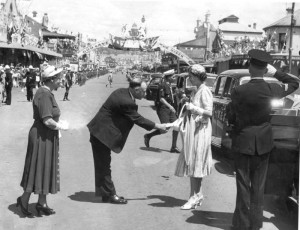